Festering in her house while the streets flooded during and post Hurricane Harvey, Kathleen “Kat” McFadden began researching agencies she could work with that would be most impactful to the community. When she finally managed to get out of her driveway, Kat headed over to Houston Pets Alive! (HPA!) because it was closest agency and because she’s always been drawn to helping animals.

“They have no voice and often have the potential to get overlooked in all the chaos,” Kat said.

When she arrived at the Stella Link shelter, Kat was able to jump right in, making use of her volunteer time organizing all the donations coming into the cattery so that the space could be used most effectively and efficiently. She even jumped in to cover some lead shifts and helped direct volunteers. Kat knows the importance of pet rescuing movements and how they provide a safe overflow for the primary shelters.

“The influx of animals rescued since the storm has been staggering,” she said, “and without groups like Houston Pets Alive!, these babies would have nowhere to go.”

As Kat put shifts at HPA! under her belt, she wanted to also help with temporary fostering. While volunteering with the Red Cross, she tried to assess what options there were in Houston. She was disappointed in how many instances there were where pet owners felt pressured to give up their animal companions because the housing being provided to them might not allow pets.

“I think this is one of the disappointing realities that needs to be worked on in the future,” Kat said. “It breaks my heart that so many people have been separated from their families after losing everything else.” 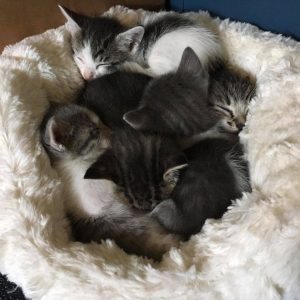 Kat decided to take on a mama and litter of kittens because there was large influx of litters that required fostering immediately after the storm and she had the space. Throughout her time volunteering at HPA!, she noticed two needs: 1) getting babies out of shelters and 2) getting sick animals helped. Kat had an open room, so five three-week-old kittens and their mom joined Kat’s family as soon as she heard about them.

“My favorite kitten is the little runt, named Harvey.” Kat said. “We actually named all of the kittens after 2017 storms (Gertrude, Harvey, Irma-Lee, Jose, and Katia) as a tongue-in-cheek joke about how little kittens are storms themselves. Indeed, the littlest girl, Katia, is kind of like a tornado circling around the room in a spastic fit, in search of all the things to chew! All their personalities are unique too – Gertrude is playful and curious, Irma-Lee (a girl calico that turned out to be a boy!) is the gentle giant of the group, and Jose is the independent adventurer. Harvey is just a doll. He was struggling with getting enough to eat and so I spent a lot of time hand feeding him baby food and milk. He loved cuddles and lap time, and I believe he will become a fantastic lap cat in his future furever home.” 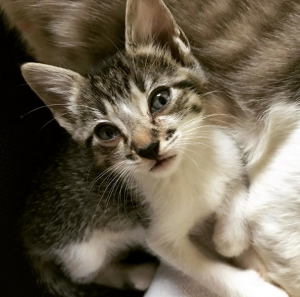 When not volunteering or fostering for HPA!, Kat is a geologist working in an oil and gas company in Houston. She loves gemstones, writing, and kitties. Earlier this year, she started a jewelry company called Ouros Gems and plans to release her own custom jewelry line at the start of 2018.

Kat and her husband have two rescues they call “floofballs” named Zoey and Zed. Zoey is laidback and talkative, while Zed is playful but shy. But Kat and her husband did another amazing thing – they welcomed the kittens’ mama into their family! 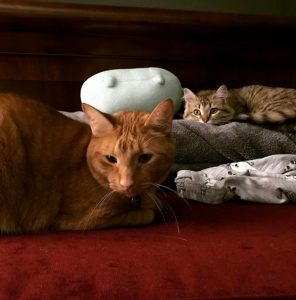 “We gave her the name of Zelda because my husband is a big Legend of Zelda fan, and because she has a very distinct, sharp face and thin elfin body,” Kat said. “I can already tell she is going to have a strong personality and will one day be queen.” 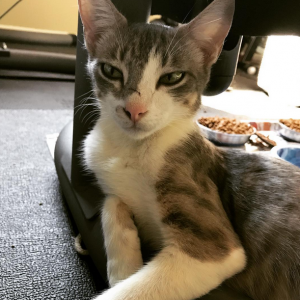 When Kat and her husband took in the mama and kittens, they talked about keeping one of the kittens. After spending more time with the mama cat, Zelda, they realized she had a rather tough time. She entered Kat’s home abandoned, starving to death and without energy. Kat and her husband know they can offer Zelda a wonderful, comfortable life.

It was a bittersweet farewell to the kittens, but Kat knows they will be in good hands with the HPA! team and end up with wonderful families. When Kat dropped the kittens off at the shelter over two weeks ago, she wrote them a beautiful tribute:

“Go forth, little kittens. Fit into every shoe for as long as you can. Climb all the walls. Demand all the foods. Nestle into all the cuddles you will assuredly be offered. It’s been brief, but know you’ve touched me deeply. Left a rivet in my heart that reminds me of something other than high floodwaters and epic loss. It’s a big world, little kittens. Your bright eyes and broad paws will reach out to explore, and you will find all the nooks and crannies of people’s souls as they wrap they’re hands around you and hold you close to their chest. Be the sweeping hurricanes to all you encounter as you were when you came into my life. Someone, somewhere is looking for a tiny storm to take them away.”

Thank you, Kat! For your willingness to open your home not only to foster, but to adopt. We are so grateful you decided to jump in and help after Hurricane Harvey. We feel lucky your family joined ours!

If you are interested in photos of these kitties and some of the fosters, Kat has an Instagram page called @whiskersnfloof.